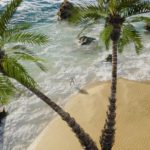 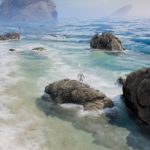 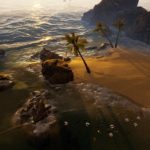 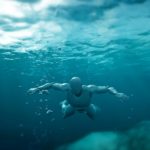 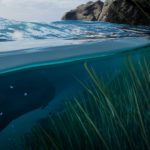 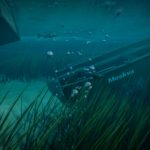 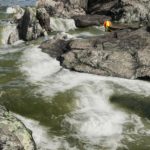 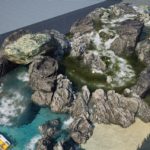 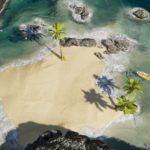 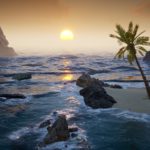 With great power comes great responsibility. I’m trying to be a reliable marketplace creator so it is important for me to be clear about the limitations and disadvantages of using simulations. The Fluid Flux system is overhyped so please read the description below before you buy this product and make sure that everything meets your expectations and requirements:

Code that doesn’t exist is the code you don’t need to debug. I am trying to do my best and solve all possible bugs or find good workarounds but there is always something that can be broken it’s like a typical lifetime of applications nowadays.

Simulations can be unpredictable some edge cases are probably still not handled. In case of finding some specific bug, you can rep[ort it to me and I will take a look at it in a few days. Before sending the report:

Now you can report this bug by sending an e-mail at: krystian.komisare@gmail.com.

Current status of improvements can be followed on treello. 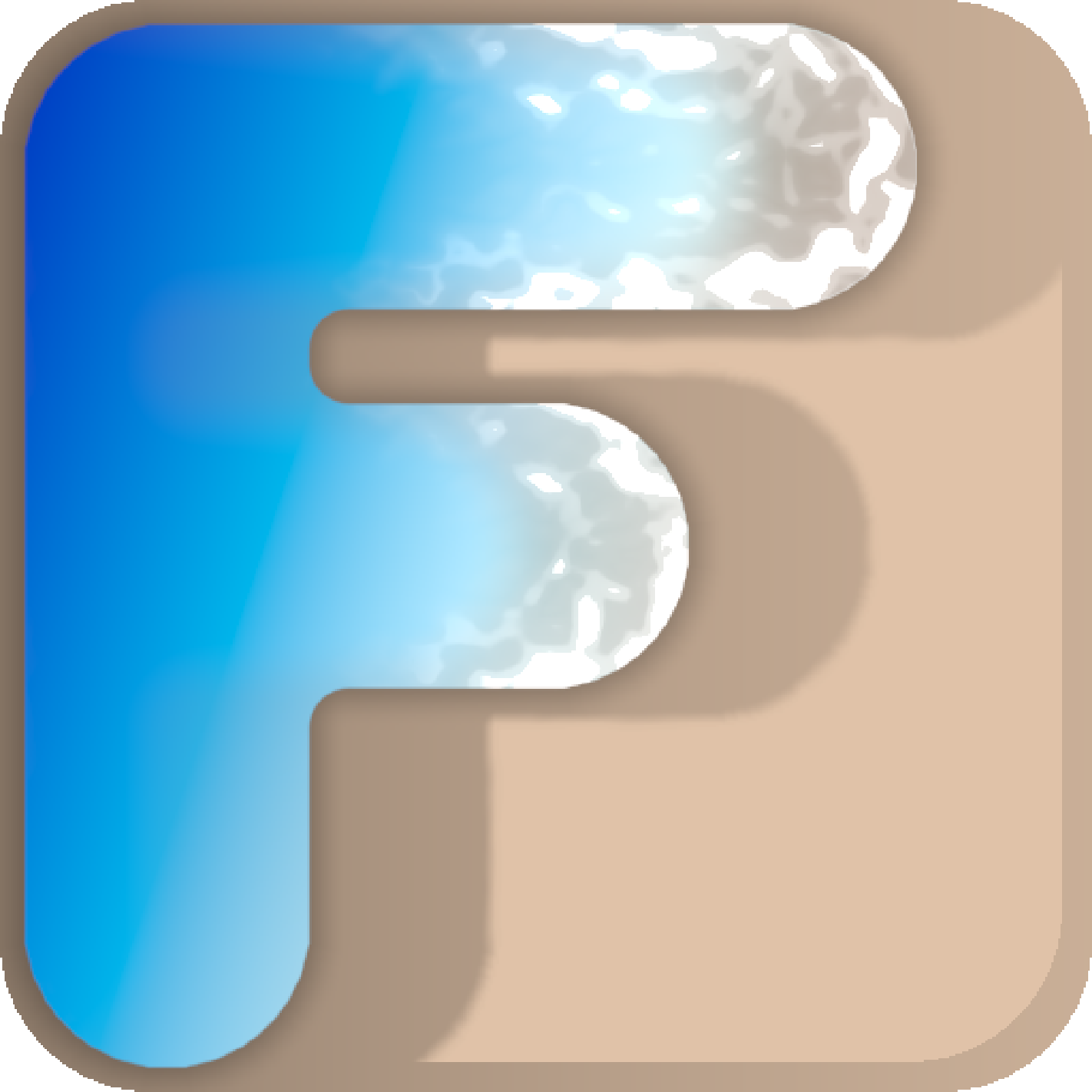 This section covers the fundamentals of Fluid Flux and its tools. If you are new to Unreal Engine, you should become familiar with the Unreal Editor interface, Blueprint visual scripting, and the types of content. Working according to the documentation can provide the best possible experience with this product.

The Fluid Flux pack requires enabling a few basic plugins and TPP input config for testing the character. The package is an asset pack so it can be downloaded directly to the project. The package can be added to any project using Epic Launcher but users also can use an empty project compatible with UE4.26 configurated by me that can be downloaded from the link:  FluidFlux_Template.

A list of plugins that needs to be enabled can be found below:

The first place to visit in the demo folder is Demo/Maps. This folder contains all example maps that are working perfectly with the TPP example character (BP_DemoCharacter). If the project uses another character template then probably input should be changed to make it work. Input config can be downloaded from this link: DefaultInput

Make sure that DBuffer is enabled in your project settings because it’s required for proper decal (wetness and caustics) rendering. If you don’t want to use those effects then you can disable decal material in the surface actor.

The Fluid Flux project is organized in a certain way, this short description will bring you closer to what kind of content can be found in each folder.

The current newest version is described on the marketplace page and on top of the documentation. Frequent updates of Fluid Flux are planned so always make sure that the Fluid Flux package version is up to date but be aware of potential problems when updating.

Changes that can be made during updates:

I am always trying to minimalize the damage after the update however it is not an easy task when an update system on the marketplace supports only adding or replacing files. There are a few basic rules worth noticing before updating:

The BP_FluxSimulation blueprint is the heart of the Fluid Flux system. Basically, this blueprint handles  important tasks like:

The Shallow Water simulation is based on the idea of assuming linear vertical pressure profiles so it is simulated in two dimensions. In general, the algorithm can be described in a few steps:

The BP_FluxSimulation actor placed on the map is doing nothing because it’s empty and needs to be filled with fluid. It is the simplest way to fill containers with fluid is by adding a Modifier source actor.

Before starting simulating the fluid on your level make sure that Real-time rendering is active in your viewport options. 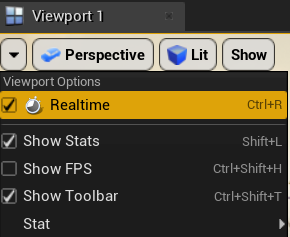 BPI_FluxModifierContainer interface can be implemented by any actor. A good example is BP_DemoCharacter that uses BP_FluxModifierInteractionComponent to interact with a fluid. AddModiffiers function only needs to be implemented to make it work.

BP_FluxModifierContainerActor is a basic container that can combine multiple modifier components in a single actor that works simultaneously.

BP_FluxModifierSourceActor is a specific type of Container actor that simplifies the process of adding simple source modifiers to the scene.

Every modifier is rendered in an additional render target pass, so it’s not cheap. It’s good practice to minimalize the number of fluid modifiers inside the simulation for achieving the best possible performance.

Sometimes simulation can behave unexpectedly because of stability loss on high slopes. It’s a well-known issue, it can be fixed by adjusting a few parameters and making the simulation more reliable.

I am still experimenting different solutions for this spikes problem and trying to figure out some method to force stability even in bad conditions. You can expect multiple improvements in the future updates. 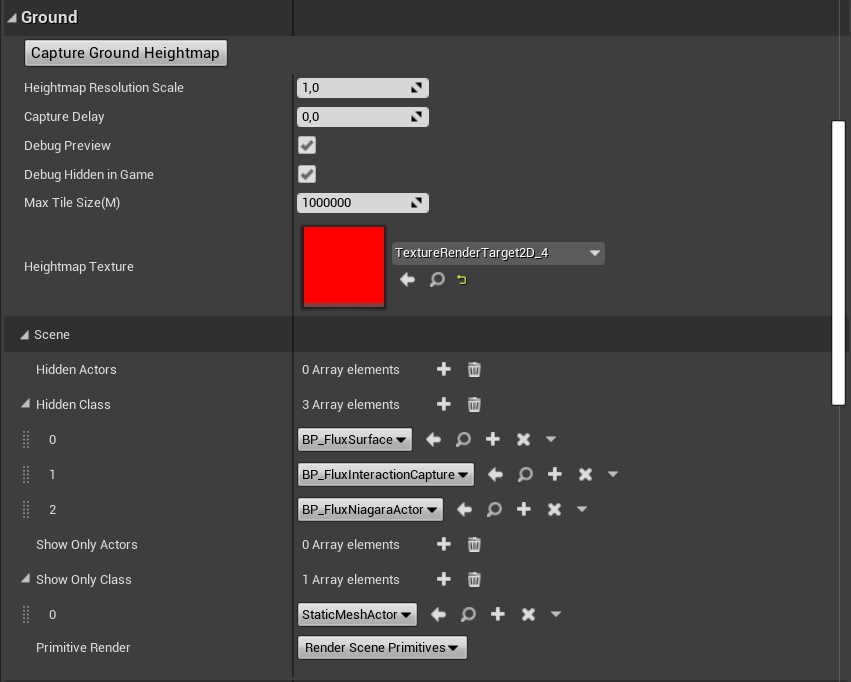 The Debug preview option is the most important feature here, it is showing a heightmap that will be used for simulating water on the scene. 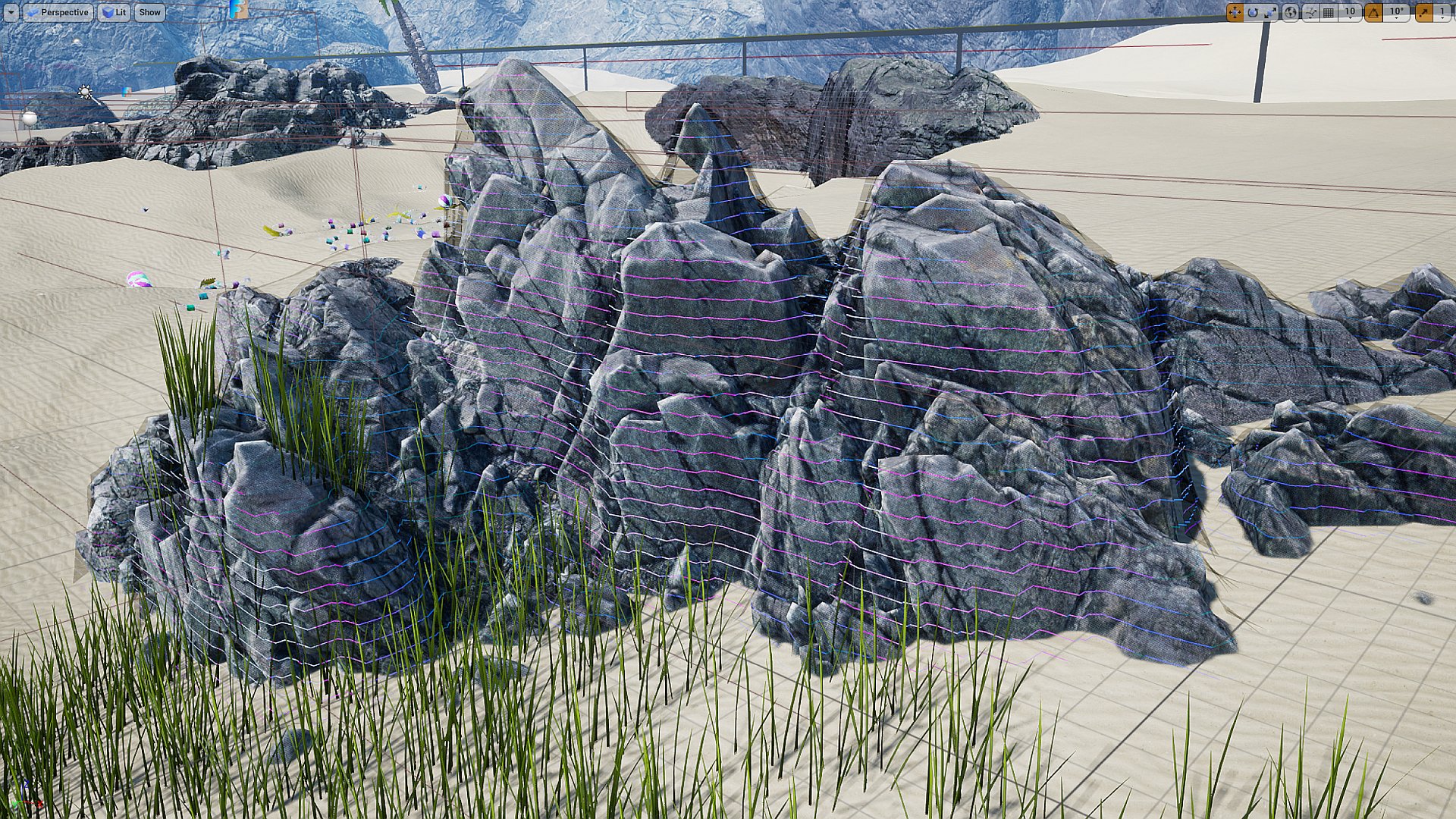 It’s noticeable that not every detail will be captured in-ground map probably and the accuracy depends on the simulation resolution scale. The shader used for rendering this preview is coloring lines based on slope and exposes the discontinuity of the ground.

If you will notice that some objects should not be rendered to heightmap you can exclude them and if something is not rendering you can start investigating what is going on without simulating the fluid.

Meshes with enabled dithering can’t be rendered during ground capturing process. There is a workaround for this problem presented in the M_Photoscan_Master material. MF_FluxPixelDepthOffset node is used for disabling dithering on objects that are rendered in top-down flat projection.

Sometimes picking “Hidden Actors” one by one to exclude them from heightfield can be a waste of time. There is an additional tag called “FluxHide” that can be used by actors to hide them automatically.

The Fluid Flux uses a static ground map for simulating fluids on it but updating is also allowed from time to time. It’s not a very cheap operation so it should not be done every frame.

The BP_BreakableDam presented in the video can be destroyed when the player hits the trigger. It is a good example of updating the ground after the dynamic object. Take a look at the Break function which is the heart of the dam system. 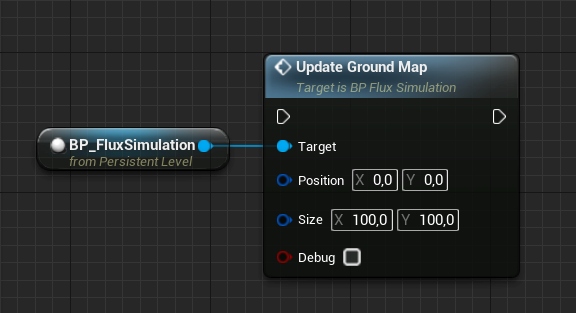 It evaluates UpdatGroundMap on a simulation actor, which takes the position and the size of the object that will disappear to recreate the ground in this area. You can do the same operation when adding something on your level.

The ground scene capture component renders the current scene to heightmap texture. Sometimes we need to exclude some actors that should not be fluid blockers. In the Simulation:Ground:Scene tab you can find multiple options that may be helpful to determine meshes should that be visible in the heightmap: 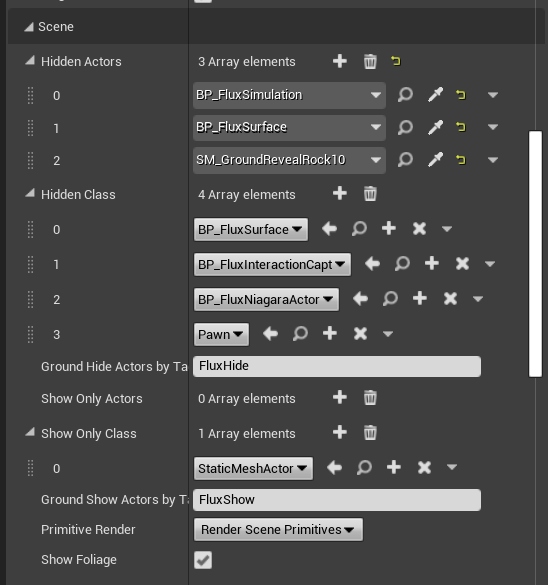 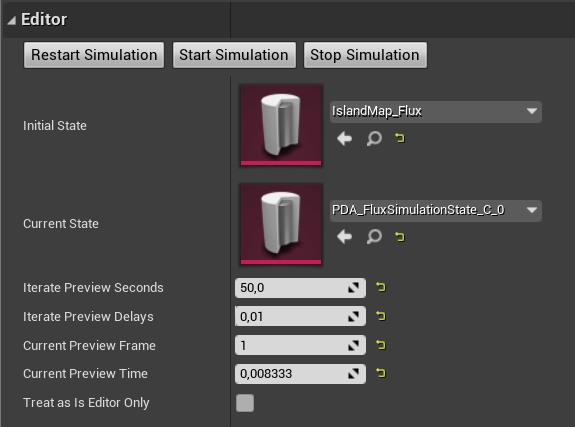 The PDA_FluxSimulationState is a special data asset created especially for storing the current frame of the simulation.  The simulation state is the most important structure in the system because:

Pay attention to simulation resolution! The “Power of Two” rule is a fundamental necessity due to the way game engines work. You will not be able to export simulation state if it is size is not power of two (128/256/512/1024 etc.)

A short tutorial about generating the fluid states:

The state use case is described below:

The BP_FluxSurface is responsible for an audiovisual representation of the simulation state data. The Surface actor supports a list of advanced subsystems:

In the tutorial below, we will go through a useful workflow for generating static meshes based on a baked state of the simulation. With this method you can achieve the highest performance, unfortunately, the waterline effect will not correlate very well with static mesh geometry.

Mesh generation tools can be found in the BP_FluxSurface – Procedural Mesh tab.

Switch GenerateProceduralMeshView = true to see a preview of the generated mesh. After choosing this option surface automatically generates static mesh based on the Procedural Mesh tab configuration.

The last step is selecting SurfaceProceduralMesh Component and clicking “Create StaticMesh” which will export the mesh to the static mesh asset.

If SurfaceProceduralMesh is not visible on the list of BP_FluidSurface components then you have to deselect the surface and select it again. It’s working like that because the engine does not refresh the list of components after switching on/off generation mode.

Now you can find your static mesh in content browser and preview it. 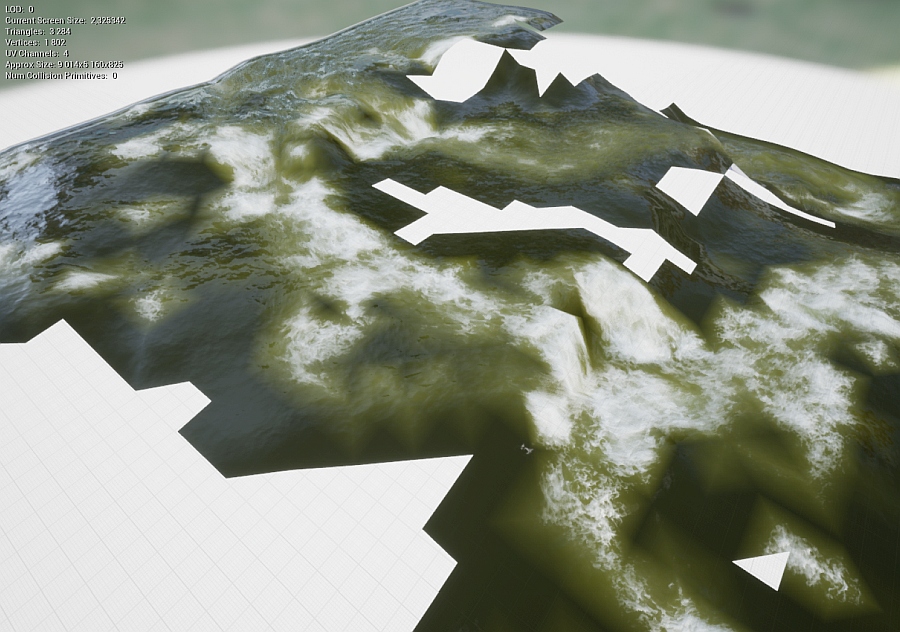 The river is simulated on the map and then converted to static mesh. The velocity flow map still works, mesh can be directly used by the surface actor.

Saving static mesh assets with dynamic material is impossible that is why you will have to clean the material slot in the newly created mesh before saving it. You can also set “static” type of material (MI_River_SurfaceOverStatic .UseFluxState = false) that will allow to preview mesh in editor.

BP_FluxSurface can render static meshes using SurfaceMeshMode=StaticMesh which means the mesh will not be transformed by simulation state scale and geometry will be taken from SurfaceOverMesh component configuration.

The Fluid Fluix is using Niagara asynchronous readback events to read data from fluid render targets and pass them to blueprints. The BP_FluxDataComponent is a listener that can receive, update and store fluid data at a certain location.

The Fluid Flux uses this feature in multiple situations:

Add BP_FluxDataComponent to your actor and it will automatically detect the fluid surface under the actor. BP_FluxRotatorActor is a good simple example of an actor that can react to fluid.

The BP_FluxInteractionCapture is a system designed for adding detailed ripple simulation on the fluid surfaces as a result of the interaction.

An example of the interaction system configuration on the actor side is presented in the BP_DemoCharacter. The implementation is based on three elements:

The Niagara integration is based on three elements:

All particle systems (trash, plants, splashes) in the pack are constructed the same way, fill free to check the examples and modify them.

The BP_FluxOceanWave is a dedicated actor for simulating ocean waves. Implementation is much simpler than the classical analytical approaches like Gertner or FFT. The system uses multiple tillable textures and combines them into a heightmap that can be used in the post-process/surface/Niagara system to represent wave displacement.

The fluid surface uses data from BP_FluxOceanWave placed on the map pinned to the BP_FluxSurfaceActor variable. The blending between simulations of ocean waves can be configured in special cases like on the beach map.

The beach example contains ocean waves blended with fluid simulation. All materials configurated for use with oceans are declared in the Surface/Templates/Ocean/  folder. Surface material uses UseFluxOcean=true flag to activate ocean wave blending.

Additional waves in the background with simplified material (SurfaceDistantMaterial) are attached to the surface in the “DistantMeshes“.

Preparing an ocean scene is an advanced topic because it requires multiple actors working together at the same time. It’s good to try all other tutorials before starting working on recreating the ocean scene.

There is no video tutorial for ocean waves yet because I am planning a lot of improvements on this topic (infinity ocean surface already implemented) that will be published soon in version 1.2 of Fluid Flux. The tutorial would out of date very fast so I decided to make it after the release.

Examples of setup are presented in the demo maps FluxIslandMap and FluxBeachMap you can copy this setup (Surface, Simulation, WaveTexture, WaveModifier) or create it from scratch on your map. Recreating the ocean scene and detailed waves setup is described below: