Infinity Weather is a powerful and clean system designed for weather control in Unreal Engine.

The package is a combination of 7 systems that could be divided into separate packages: wind, displacement, landscape, precipitation, footsteps, fog, post-process now available as a configurable unified system. 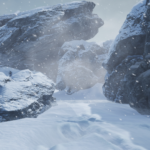 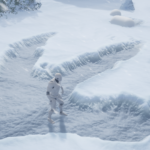 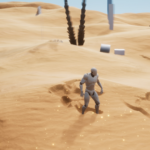 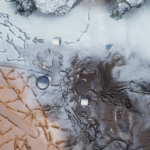 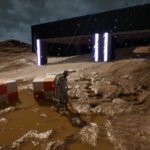 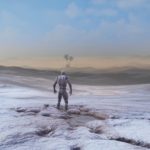 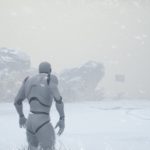 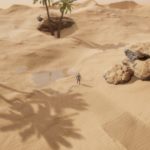 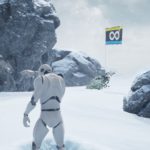 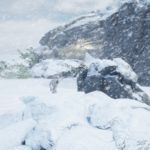 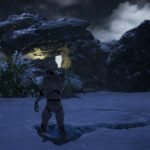 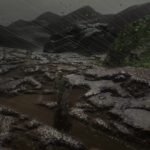 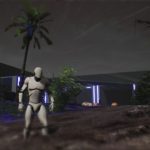 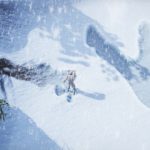 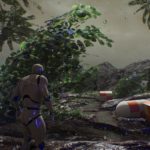 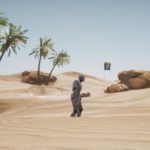 The package requires a procedural mesh component to work so make sure that it’s enabled.

The package works perfectly with the TPP input config files. if you have used other template then probably you will have to add inputs into your project for package testing:

The package is now ready!

Every user of this package should start by checking all examples delivered with the product. Example maps can be found in the InfinityWeather/Demo/Maps folder.

There are available multiple examples that preset different configurations:

The example character interaction with the Infinity Weather world is implemented in Demo/Mannequin/BP_DemoCharacter by four basic components added to it:

The most important element of the pack is the InfinityWeather/BP_InfinityWeatherController blueprint that gives the users possibility to control the weather conditions like fog, wind direction, precipitation, and accumulation.

Just drag and drop BP_InfinityWeatherController on your level to start controlling the weather.

Atmosphere effects requires Exponential Height Fog plugged into the BP_InfinityWeatherControllers to work properly. Remembet to polace height fog actor on your map and set the attribute of weather controller.

A list of weather controller attributes looks really simple but it’s a really powerful tool. For testing try to set some rainy windy weather using parameters like before: 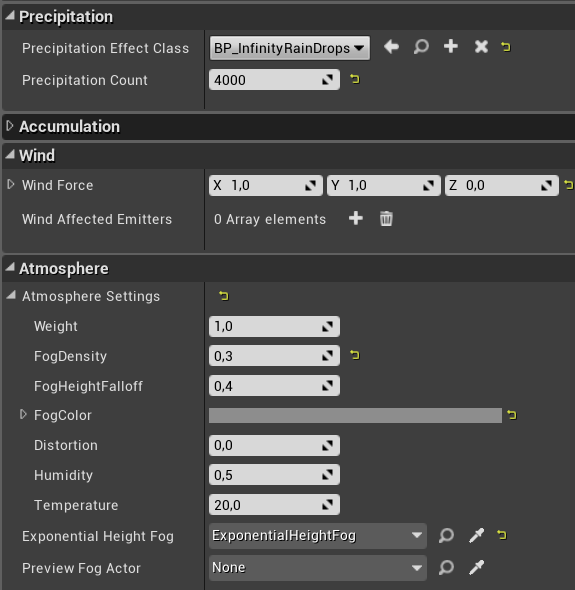 The system can be controlled dynamically by blending between parameters during the game using the functions below.

The precipitation system is the most advanced part of this pack. The system is based on single material combined with a single mesh (no Niagara or Cascade). The effect of billboarding is computed in vertex shader in the local space of the camera. That means the system has almost no PCU cost and the system is ultra-fast.

There are few predefined effects in the system (/InfinityWeather/Precipitation/)

The precipitation effect can be used without a weather controller. Drag and drop blueprint of the chosen effect on the map.

A manually placed actor can be configured and limited by the area of precipitation. Users also can use multiple weather types visible locally in some areas of the map. All parameters are described in editor hints. 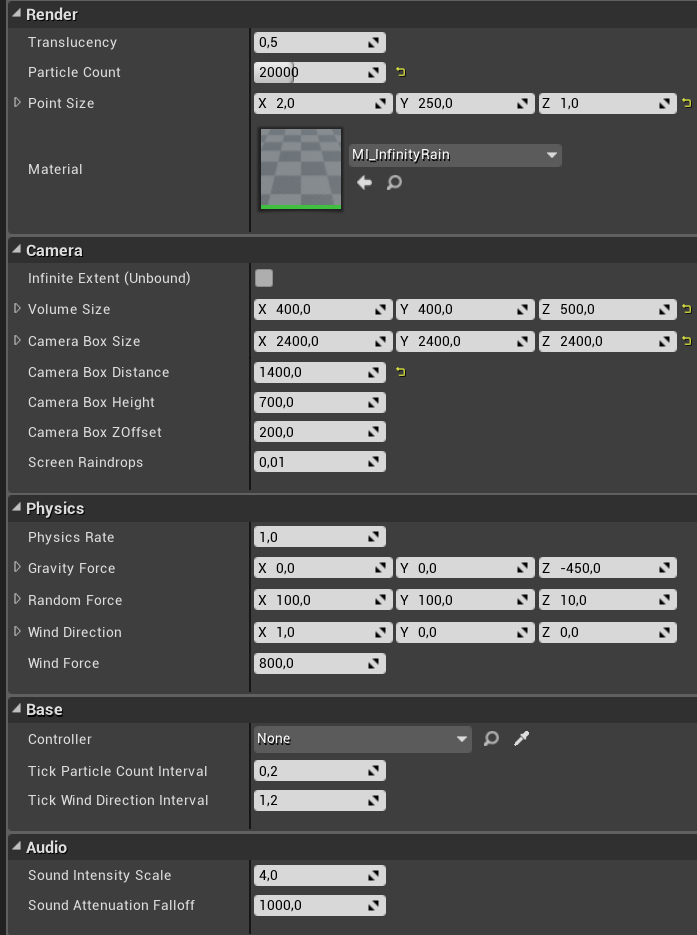 Users can create your own precipitation effect classes for specific rain/snow configuration by extending the base class and changing attributes. That newly created class will be available on the Precipitation Effect Class list in weather controller.

The /InfinityWeather/Precipitation/BP_InfinityPrecipitationOcclusion is a specific type of actor that contains render target texture used for calculating precipitation collision with the roofs and other meshes. After placing this actor on the scene you will notice that in the area of occlusion map the rain and snow are not rendered under the meshes.

Currently supported is only one occlusion map per level but its planned to implement switching between multiple occlusion maps dynamically.

The wind is based on the integration of multiple effects that react to a simple wind direction vector.

Currently, the wind effects can be controlled globally on the full scene using the Wind Direction vector in BP_InfinityWeatherController.

Most of the objects that react on wind use Environment/Functions/MF_InfinityWind material function that returns all important information about current wind status. Its the simplest way to get global wind data. 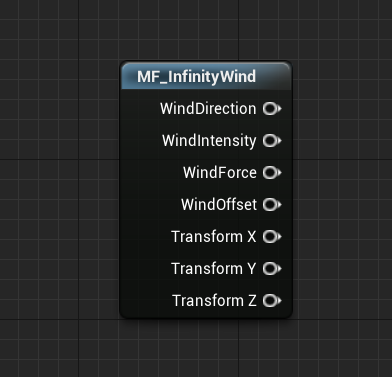 List of implemented effects and objects that reacts to the wind force. 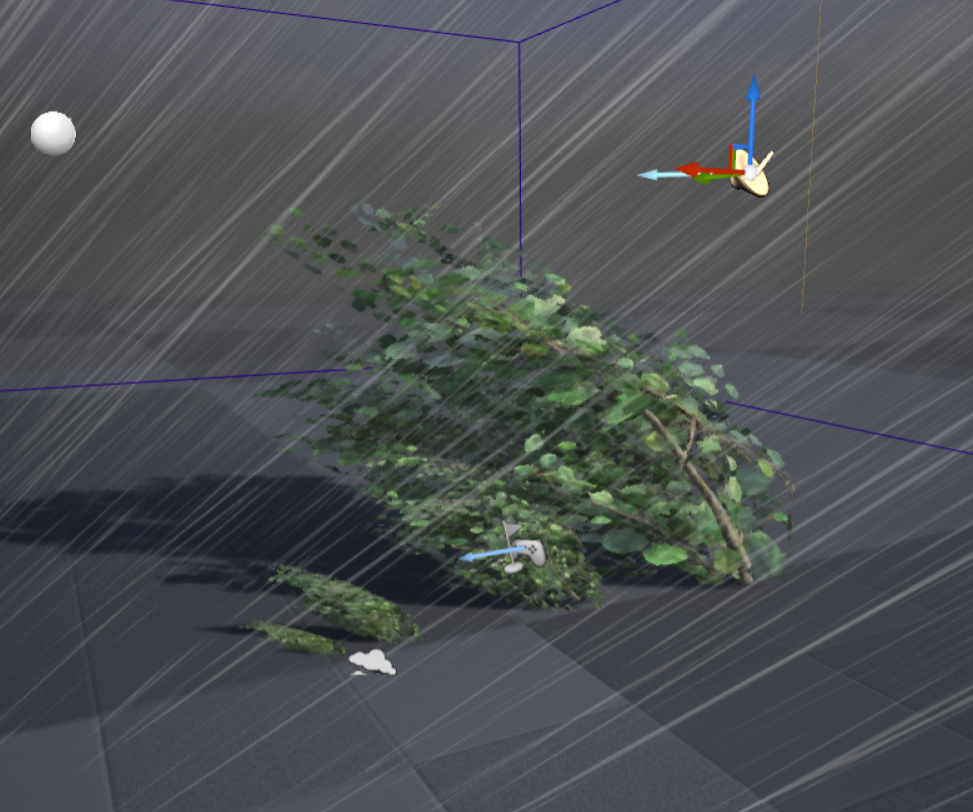 The BP_InfinityFog actor can be used for changing fog settings in some areas.  Fog actor is divided into two parts

Currently supported is the only the ellipsoidal shape of fog.

Accumulation is the group of parameters that controls coverage of snow and wetness of meshes that uses the MF_InfinityWeatherSurface node in the master material.

MF_InfinityWeatherSurface is an advanced node that adjusts base color, normal, and roughness values to current weather conditions set by the two basic parameters that are used in the material.

An example of use MF_InfinityWeatherSurface is presented in the rocks material M_RockSnowMaterial. Drag and drop rocks mesh(/InfinityWeather/Demo/Environment/Rock/SM_Rock ) on your map to check how weather conditions affect the material. Notice that the combination of wetness and snowy material can result in a nice-looking effect of icy snow.

Additionally, meshes can be painted by vertex color (red channel) to mask the effect on meshes that are hidden under the occluders.

A more detailed description of additional parameters can be found in the landscape and displacement section.

The Infinity Weather system introduces an advanced displacement material system based on render targets. In short, the BP_InfinityDisplacementCapture actor is searching for actors around the focus point, that implements BPI_DisplacementShape. BPI_DisplacementShape implementation adds the list of shapes (a type of shape and transform) to the stack. In the final stage stack of shapes is rendered to displacement texture. The iteration is repeated every frame with some random offset.

Basically, 3 elements are needed to make the system work:

The video below shows how to combine all these tools and make it work:

Landscape material is an advanced topic because requires basic knowledge about an unreal material system to inject them into the project.

Example content (Landscape/Materials) comes with a few examples of the landscape configurations to make this step easier. There are simple materials that cover the landscape fully by a single type of displacement:

There is also an advanced version of the material that is a combination of all three effects in one landscape. Additionally, the extended version supports the MF_InfnityWeather. Available in two versions virtual texturing and multilayered

The material is a combination of four nodes:

The BP_InfinityDisplacementCapture is the main actor that prepares displacement depth textures for landscape. Below a simple explanation of how the algorithm of this actor actually works:

A simple configuration of the scene with displacements presented below:

Two types of render targets are defined in the system. Both area size can be changed in capture displacement actor.

The displacement map rendering is based on ray tracing shapes in the shader to get the best possible efficiency but it’s also limited to the number of shapes predefined in shaders. The shapes that can displace the ground are defined in the /InfinityWeather/Displacement/Blueprints/Shapes/ folder:

All of them can be placed on the map and scaled.

BP_InfinityDisplacementComponent is a component that allows attaching a list of shapes that affect displacement ground.

The example implementation of displacement component in clean mannequin character presented on the video below:

Adding displacements to your character is really easy:

After those few steps character will be detected and ready to work.

The configuration of displacement shapes attached to actors is stored in Data assets (PDS_DisplacementShapes).

Infinity weather contains few examples of data assets for mannequins and vehicles but any user can create custom data assets that will work with specific skeletal mesh. Creating a displacement data asset is simple:

Newly created data assets can be used in the characters but we still need some shapes definition. Shapes can be added by hand but Infinity Weather comes with a simple editor that helps preview how shapes are attached.

The engine sometimes wrongly detects the footstep ground because of limited landscape layers blending during ground tracing. Footstep volumes BP_FootstepVolume can solve this problem easily. When the character is inside the volume then the system uses the footstep set in the volume definition so the incorrect footstep effect is overridden.

The priority and Required conditions are taken into account to choose the most relevant footstep effect. It can be even filtered. The example below shows how to config volume on second priority (higher priority more important) that spawns snow and will be visible only when there is at least 0.1% of the weather displacement active.

The BP_InfinityPostProcessComponent placed into an actor that contains the camera component will add automatically the post process material and communicate with the weather controller to get info about the current conditions.

A custom post-process object can be also set by function SetPostProcessView.

MI_InfinityPreTranslucent – a group of effects rendered before the translucency layer.

MI_InfinityPostProcess – a group of effects rendered after the tone-mapping. 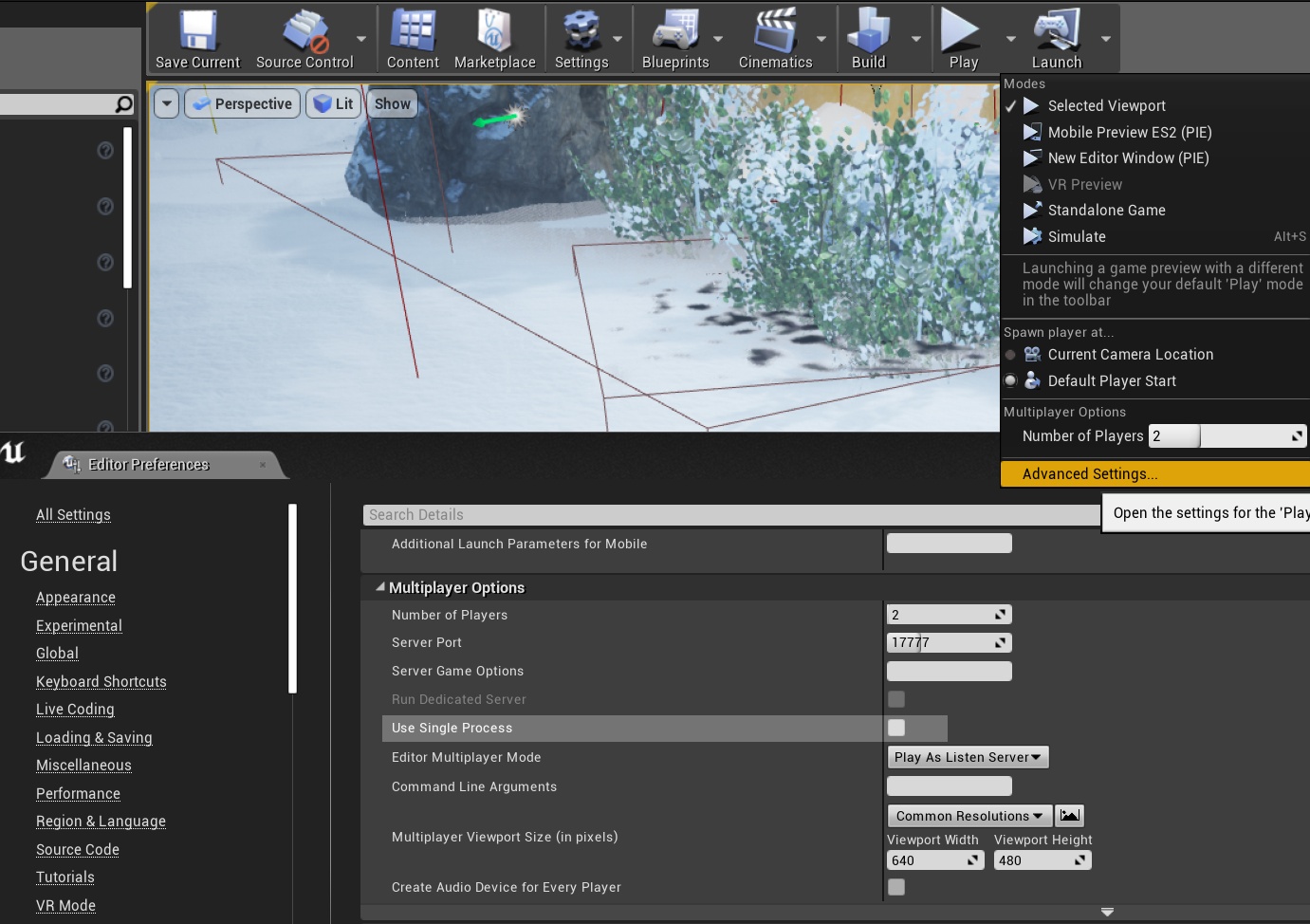 Future features that will be implemented for multiplayer games: